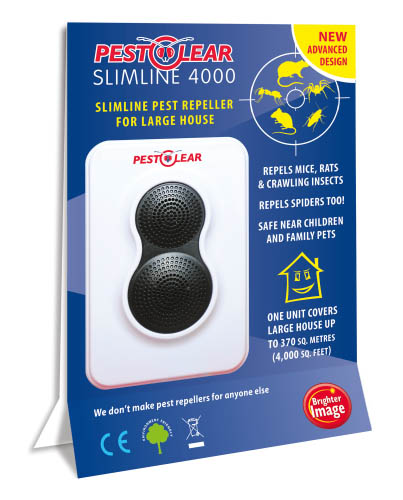 The unusually mild winter has led to a massive increase in the number of mice and rats surviving into Spring.  Mice and rats breed prolifically, and in theory, a pair of breeding mice that enter your house on 1st January could be the originators of up to 32,000 more by the end of the year, if all offspring survived and started breeding themselves.

Preventative control of mice involves three things, according to Liam Gavin, inventor of the PestClear range of rodent repellers.  First, limit access by keeping doors and windows shut, sealing up any obvious holes in the building, and carefully checking for gaps where the roof meets the walls.  Second, remove sources of food and nesting materials as far as possible.  That means keeping all food in sealed containers, cleaning up crumbs and food spillages, and not leaving scraps of paper, cardboard and other potential nesting materials lying around the house.  Third, every home should have at least one “whole house” pest repeller, like the PestClear Slimline 4000 pictured here, and also a supply of good mouse traps, so you can act quickly if and when mice get in.

No pest repeller can prevent a determined mouse from actually getting into the house, just as a burglar alarm doesn’t stop a burglar from breaking in.  What the repeller does is to create an environment in which the mouse is uncomfortable, so it will not construct a nest and start producing lots of baby mice.  At the first hint of a mouse, set several traps, and place them, edge out, against the wall.  PestClear pre-baited plastic mousetraps come in packs of two, and they are preset with a peanut butter mix that mice love.  The PestClear repeller confuses and disorientates the mice, and within a couple of days they will either leave the house, or get caught in the traps.

Poison in the home – no thanks !

Here at PestClear, we don’t think using poison in the home is a very clever move.  Mice that die within the walls will decompose and smell absolutely rotten, and if they manage to get outside they could be eaten by birds, or even the family cat, thus putting these creatures at risk from the poison.  We work on the basis that prevention is better than cure every time, and a pest control regime based on limiting access, removing food sources, and electronically disturbing the mice gives the best results every time.